The Physiology of Trauma

The Physiology of Trauma

The primitive structures in our brain are set to respond to real and perceived threat in order to increase our chances of survival. Something which is clearly a threat to our lives, such as an assailant with a knife, or a predator in the jungle, results in  a structure known as the amygdala sounding an alarm and then other areas of the brain releasing stress hormones so that we can go into survival mode of fight, flight or freeze.  At times of this increased arousal we learn that certain things are a threat, but we also associate other things happening at that time which can later predict the threat situation. Through classical conditioning we then respond to stimuli in our environment which can, in fact, be innocuous! This can lead to avoidance of the perceived threat situation, therefore staying safe. For example, a former police officer in Northern Ireland refused to buy battenburg cake for her family. This was because the almond smell of the marzipan was similar to the lingering smell of the explosives used in IRA bombings in the early 1970s. She wasn’t consciously aware of this association but because she had been conditioned, she responded with voidance of the situation. 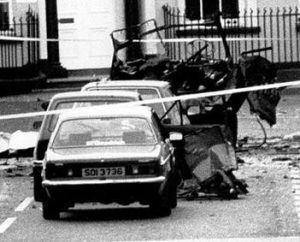 Photo by Unknown Author is licensed under CC BY-SA

The amygdala is also aroused when we are faced with a lurking threat, we know it’s out there, somewhere, but we can’t see it. For primitive man, this was the sabre tooth tiger somewhere outside the cave; for us, it could be COVID-19. In these circumstances a partial alarm is sounded by the amygdala and we go into a state of preparedness to spring into action for fight or flight. It’s like a sprinter on the starting blocks, “On your marks, get set…”, they are tensed up and ready to go. When in this state, minor daily irritants become hassles and we respond to these as a threat – e.g. shouting at another driver after they cut into your lane in traffic, or rowing with a partner after them apparently sighing. Returning to work will reintroduce demands on us. These may be sufficient to lead to the amygdala seeing the workplace as a threat situation and us responding as if our lives depended on it. When activated, the survival response is paramount with rational thinking pushed to the side and full conscious control impaired.

For more information on our services and how we can help you, please contact us today.

You can also keep up to date with what we do on LinkedIn.

← Trauma Experiences in relation to Covid-19
Harassment and Put Downs : Reasons Why and How to Cope →
Speaking → Contact Michael →