Harassment and Put Downs : Reasons Why and How to Cope

Some people experience harassment and  put downs from others; they belittle them or laugh at them in company. You may wonder why this happens, why people should behave in such a way. Dr Michel Paterson OBE explains about harassment  and put downs : the reasons why people do this and how to cope.

There are many reasons why people are subjected to harassment and put downs, and receivers of this frequently struggle to cope. Often the harassment and put downs are given because the offender has low self-esteem. This can be due to major trauma in their lives, such as abuse of different sorts:  physical abuse, sexual abuse, and/or emotional abuse. It can also be due to neglect, them not getting their needs met in the family in which they grew up.

In addition to abuse, there can also be other traumas, such as criticism that they may have received from parents, or from teachers at school. By engaging in harassment and put downs of you, the offender can sometimes feel better about themselves. It gives relief to their ego, but that relief is only temporary. Then they’re back doing what they do once again.

They might actually be jealous of you. They might see you as being very successful, and your success is showing them up. Well, they don’t like that! By trying to put you down it’s as if they’re trying to bring you down to their level, sucking the positive energy out of you.

Put downs can feel like harassment from others. By them doing this to you, it may lead to them getting attention, particularly in a group setting. By attention going to them through making a negative comment about you, it helps them feel important and then feel accepted. Imagine if they’ve grown up in an environment where they felt unimportant.  They might have a negative belief about themselves of, “I don’t matter”, or “I have little value”. By trying to show you up, in their eyes they feel big. By getting others to laugh at your expense, they feel as if they’re liked in some way. However, it really only shows them up in that group setting.

When these comments are made to you, it can also lead to the offender feeling as if they have a sense of control. Control could well have been lacking in their lives up until that point. By making the comments to you, they feel as if they are in control of the situation. But really, it doesn’t put them in control of you, unless you respond of course!

The put-downs could also be because the other person is narcissistic. By trying to put you down it feels as if they’re able to manipulate you and control you in some way for their benefit.

Often people who put others down have negative emotions and these arise from other situations in their lives. By trying to offload these on you with put downs, they are trying to displace their distress. It’s their stuff, it’s not yours.

In some circumstances people lack emotional intelligence, or not know what to do in certain social situations. That is their failing, it’s not your responsibility.

Ways to Cope With Harassment and Put Downs

When you feel that negative comments have become harassment, you need to seek support from someone you trust. In the workplace, a manager and Human Resources can help. Laws exist in some countries to protect workers from harassment. If this is outside the workplace, depending on how severe, police may need to be involved. If the harassment you experience is lower level and more in the form of put downs, please read on.

One of the things you can do first of all, is remind yourself it is them who has the issue, not you. They are the ones with the problem, based on their life experiences. It does help if you tell yourself this.

Another thing you can do is visualize a force field around you. Alternatively, visualising something like a bell jar, the type of thing you might put over cheese, could be equally as effective. In the imagery, as the incoming put downs hit the force field (or bell jar) they bounce off it.

You can also evaluate the evidence against the put downs. Do this internally, think it through. It’s the sort of thing that one would do in cognitive behaviour therapy.

Laugh it off! With a sarcastic smile you might say to the person, “You’re so funny!” That lets others see that it’s not an issue for you and you aren’t rattled.

You might respectfully disagree. “Yes, that’s an interesting comment but I totally disagree with that view”. Alternatively, you might say to them when they have cast aspersions on what you have said you hope to do, “Thank you for that comment, I shall enjoy proving you wrong”.

Sometimes put downs can come from people who are close to you, who do matter to you in your life. They may not have intended it to sound that way, so you could tell them sensitively how you feel. You may word it as, “You may not have intended to hurt me when you said that, but whenever you said X, I felt …..”. By you taking responsibility for your feelings, you’re not putting them down in return. In fact, whoever it is who puts you down, don’t get into fighting fire with fire. By you biting back at them, it can get into an argument and it will show you up as appearing just as bad as they are.

Sometimes people in our lives, who we might have thought of as friends, are not really friends. You need to consider, do I actually want this person in my life? A way to evaluate where the offender should be in your life is to think of your relationships as being situated in a medieval castle. Where is the person in relation to you, and where should they be? 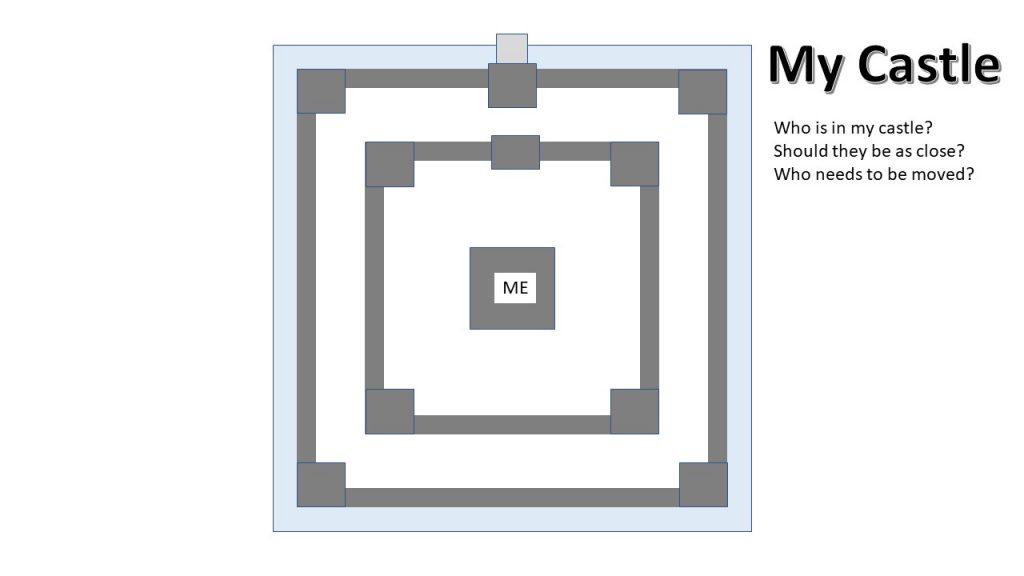 If you look at the castle picture above, you will see in the centre of the castle, the castle keep. That is where you are, and that’s where those who should be close to you, and are valued by you, should be too. But consider people who are in your life who put you down. Where are they are in relation to you? Are they inside the inner wall, or between the inner wall and the outer wall? Are they on the drawbridge? Are they on the other side of the moat? Consider where the person is and where they should actually be. If somebody who is currently beside you in the castle, but often puts you down, what should you do? If it were me, I would be moving them out further away from me. I may even drop them into the moat!

I hope that you now understand reasons why people might try to harass you or try to put you down, and now feel you have some ways that you can deal with it. If you would like to watch a video of Dr Paterson speaking about put downs and how to cope with them, please click this link.